After gaining a BA in Drama and Theatre Studies from Royal Holloway, University of London and an MA in Theatre Directing from Middlesex University and GITIS, Moscow, Emma has worked in theatre in the UK, North America and the Far East. Directing credits for Clwyd Theatr Cymru include: The Herbal Bed by Peter Whelan, Ghosts by Henrik Ibsen adapted by Mike Poulton, Arms and the Man by George Bernard Shaw, Copenhagen by Michael Frayn, Educating Rita by Willy Russell, God of Carnage by Yasmina Reza, A Doll’s House by Henrik Ibsen, in a new version by Frank McGuinness, Shakespeare’s Will by Vern Thiessen and Oleanna by David Mamet. She also directed a national tour of Oleanna for Theatre Tours International.

Other recent work includes: Closer (Marber) at Vienna’s English Theatre, Uncle Vanya and The Cherry Orchard (Chekhov), As You Like It and Two Gentleman of Verona (Shakespeare) for Drama Studio London, Bernarda Alba – the Musical (LaChuisa) for London College of Music, Daring Dames (devised) for The Hammond, A Midsummer Night’s Dream for East 15, Silent Night by Helen Newell for Theatre In The Quarter, A History of Falling Things by James Graham at the New Vic Theatre, A Journey Through Cornish Poetry, Prose and Music with Susan Penhaligon, Richard Bucket Overflows with Clive Swift; A Christmas Carol by Charles Dickens and for various British universities: Rhinoceros (Ionesco), A Child’s Christmas In Wales (Dylan Thomas), Lysistrata (Aristophanes), Antigone ( Anouilh), and Stuff Happens (David Hare). She also directed a world premiere of a David Mamet play, The Vikings and Darwin, at the National Theatre as part of the New Connections Scheme.

She has also produced a number of Lifetime Achievement Award ceremonies for the film, television and theatre industries on behalf of the Directors Guild of Great Britain. These awards were presented to Sir Alan Parker, John Schlesinger and Sir Trevor Nunn.

In 2013 Emma directed her first short film funded by the Arts Council of Wales, entitled Out of the Darkness, collaborating with choreographer, Rachel Catherall and composer, Julian Marshall.

Emma was an Assessor for the 2017 Shakespeare Festival on behalf of The Shakespeare Globe Centre in New Zealand.

She is currently the Artistic Director of the MFA in Professional Acting with Independent Production and all diploma and short courses for Drama Studio London ( a member of the Federation of Drama Schools). 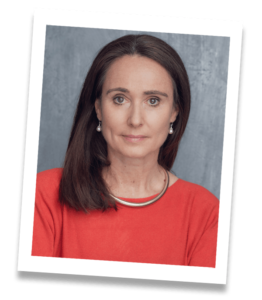 Arms and The Man – Mark Bailey